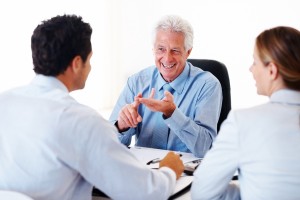 The terms that we use are second-nature to us. Deductible, agent, underwriting, riders…we’ve had a customer who is college educated and has been buying our insurance for years, but still have to have us define the word “premium” every time we have a discussion (granted, he’s admitted that his brain actively ceases at the mere mention of insurance).

So here are some of the more common insurance terms and what they mean. If you’d like to write them on your hand as a cheat sheet before you come in and see us, we won’t mind. We’ll start with the two that are most often confused with each other.

Premium: This is the amount of money you’re paying for insurance. It’s what you pay monthly (for, say, health insurance), twice-yearly (most often for car insurance), or yearly (like homeowners insurance).

Deductible: Before insurance starts paying, a deductible has to be reached. This is the amount of money you pay out-of-pocket, and then insurance takes over the rest. Take auto insurance, for example: if you have a $500 deductible, it would not cover the replacement of a $250 windshield replacement. However, it would cover $1500 of a $2000 claim. Speaking of claims…

Claim: Here’s a term most people understand. A claim is the request that an insurance company pay for damages that have been incurred by the insured. The claim doesn’t necessarily have to be filed by the insured, and often isn’t. Take health insurance, for example…the doctor’s office or hospital is making the claim on your behalf. For homeowners insurance, a roofing company might make the claim on your behalf after a hailstorm.

Underwriting: We want to sell you insurance…that’s what we’re here for. But first we have to decide if it’s a good idea to sell you insurance, and for how much. As an extreme example, if every house you’ve ever lived in has burned to the ground, we might not be interested in selling you homeowners insurance!

Agent: As an agent, we’re here to help you compare insurance rates and policies from different providers, many of which are unavailable to the general public unless you get it through an independent agent.

There are thousands of terms when it comes to insurance, but these are some of the most common. As we continue our blogs, we’re sure to have some more terms that might confuse people who don’t work in the industry. Have any questions that you need answered right away? Give us a call or stop by our Spearfish and Rapid City offices!